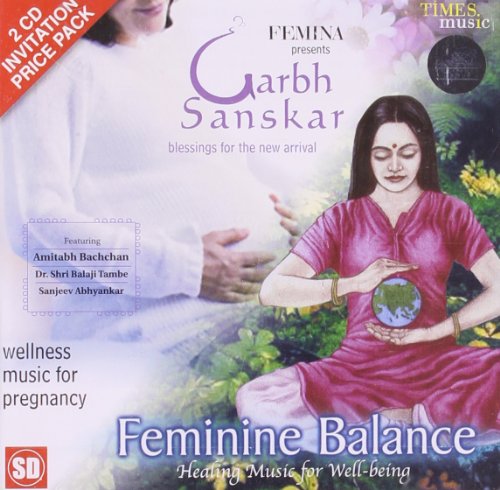 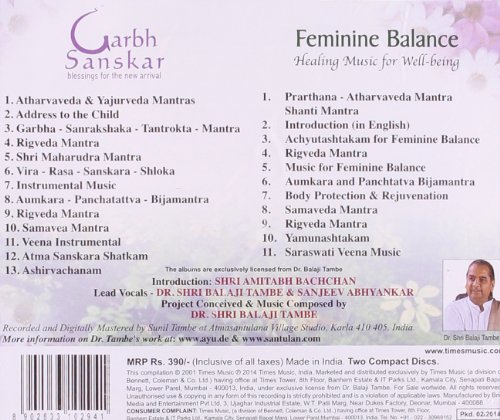 The well-being of an expectant woman is considered to be important for the health of the baby within. Garbha Sanskar And Feminine Balance is an album with a compilation of various mantras and stotras to help an expectant mother remain healthy and at the same time, help take care of the unborn foetus that is developing within her.

The fact that a baby begins learning when he/she is in the mother’s womb is given to us by the story of Abhimanyu in the Mahabharata, who learns the art of warfare in his mother’s womb. This is now a scientifically proven fact.

The mantras in the album have been scientifically chosen in order to stir up the positive energies in the surroundings. These positive energies can be passed on to the baby and can further help in the development of the foetus. The recital of some of these verses can help the mother and baby to form a bond that at the foetal stage itself.

The album contains two CDs. The first disc contains stotras and mantras from the Samaveda and Rigveda and also the Shri Maharudra Mantra amongst others. The second disc contains an Introduction in English, Music For Feminine Balance, Yamunastakam and others.

Garbha Raksha And Feminine Balance features artists like Balaji Tambe, Sanjeev Abhyankar and Amitabh Bachchan. The album was released by Times Music in 2007 and comes as two disc each of which is in the form of an audio CD.

Amitabh Bachchan is an Indian actor, singer, producer and director. He has acted in over 180 films in various languages. He has been awarded the National Award for Best Actor three times. He was awarded the Padma Bhushan by the Government of India in 2001 for his contribution to arts.

There are no reviews yet.